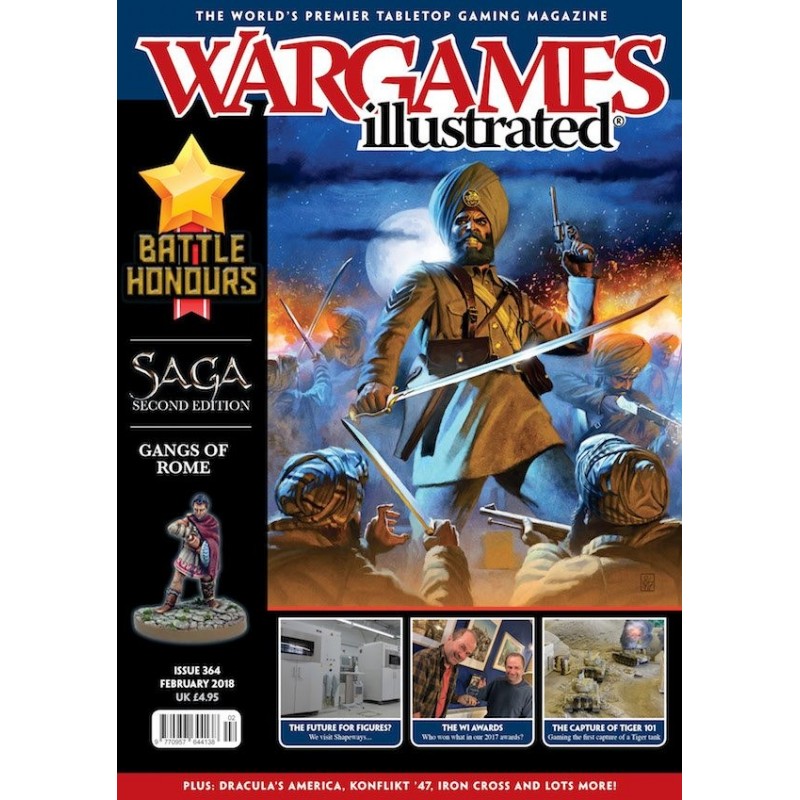 OBSERVATION POST
Our latest look at what’s new and upcoming in the world of wargaming.

THEME: ALL THE HEROES
Neil Smith introduces us to this month’s theme with a brief introduction to the history of battle honours.

THE WARGAMES ILLUSTRATED AWARDS
We present our inaugural annual awards to the companies and individuals who you voted for in the hobby.

THEME: THE BATTLE OF SARAGARHI 1897
The tale of twenty-one brave soldiers of the 36th Sikh regiment who took on several thousand Afghan tribesmen and fought an epic last stand.

RULES SHOWCASE: GANGS OF ROME
The murky back alleys and thoroughfares of Ancient Rome form the backdrop to the struggle for supremacy and power in these new rules from War Banner Games.

THEME: FOR VALOUR!
Pete Brown presents some ideas on rewarding your miniature heroes for their tabletop service.

ALTERNATIVE IWO JIMA
A different take on a famous battle of the Second World War, with a Konflikt ’47 weird war twist.

THEME: THE DIABOLICAL REGIMENT OF FRANCE
Bill Gray charts the progress of the Regiment Navarre, a French regiment which existed throughout some of the most turbulent periods of warfare.

THE SAGA CONTINUES
We asked for questions to put to Studio Tomahawk’s Alex Buchel about the eagerly awaited SAGA 2nd Edition and more. You can read his replies here.

THEME: SHERWOOD RANGERS IN PALESTINE WW1
Jim Graham takes a closer look at one of WI’s local regiments and its role in the Battle of Megiddo – 1918.

WHY I LOVE: IRON CROSS
Dave Tuck and Malc Johnston discuss the merits of this World War Two ruleset and outline how they have managed to adapt it for use with more recent wars.

FROM HISTORY, TO PAGE, TO TABLE
Author Griff Hosker worked with wargaming chums, the Essex Gamesters, to turn the fictional Battle of Herbault from his novel into a tabletop reality.

THE CAPTURE OF TIGER 101
The first Tiger tank captured by the Allies in World War Two, Tiger 101 was a beast to overcome for those brave souls who decided to attack.

COMPANY PROFILE: SHAPEWAYS
Just who are Shapeways and what can they offer to the wargamer? Members of the WI team from two continents had the opportunity to check them out.

A TALE OF SHOWDOWNS AND STAGECOACHES
An exclusive scenario and additional rules ideas for the Dracula’s America: Shadows of the West rules, all from the fertile mind of author Jonathan Haythornthwaite.

FIGHTING TALK: RISE OF THE SUPERMEN
Do we have a penchant for over-powering certain regiments in our wargames? Mark Shearwood discusses….