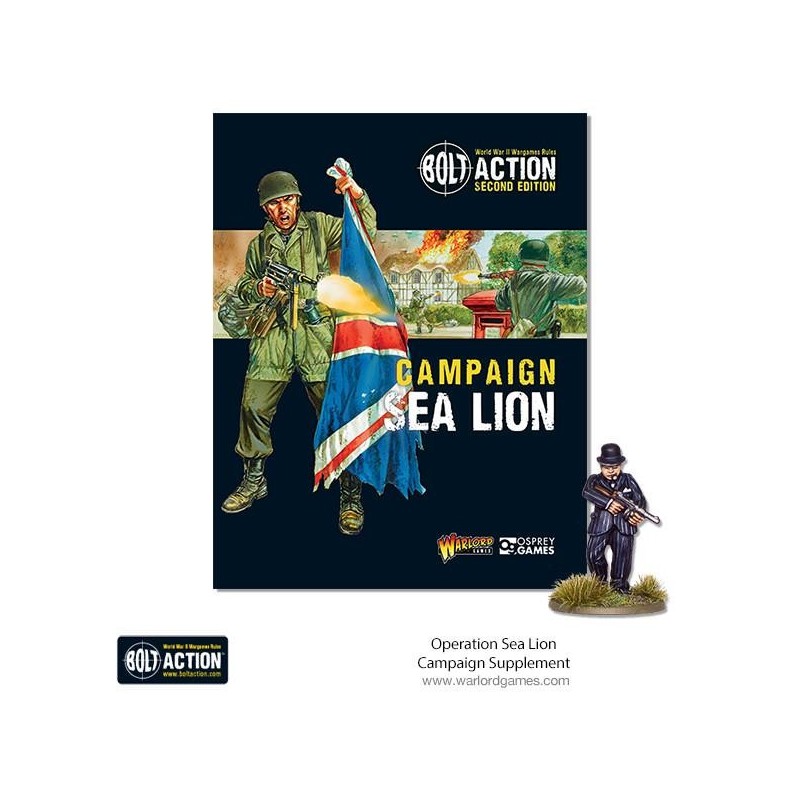 Packed with reverent nods to our favourite wartime films and TV programmes, this action packed, full colour, 124 page, ‘What If?’ Bolt Action Campaign book brings the war to the shores of England.

The Year is 1940, and the German invasion of Britain has begun!

With this new Campaign book for Bolt Action, players can fight the battles of World War II’s greatest ‘What If’ scenario. Defend the beaches of Kent against waves of German landing craft, parachute into the Home Counties in a surgical strike to capture Winston Churchill, or rally the Home Guard to hold off the invaders!

With new rules, scenarios, and unit types covering the unique features of this alternative history campaign, you now have the chance to rewrite the history of World War II.

Background to the campaign

A successful invasion of a large island with substantial military assets will never be easy; consider the plans for Operation Olympic, the proposed invasion of Japan at the end of World War II – but naval supremacy is undoubtedly a prerequisite. England’s (and later the United Kingdom’s) naval supremacy left the invincible armies of Philip of Spain and Napoleon staring impotently at the storm-tossed, twenty miles of grey sea that separated the island from the continent. Nothing essentially had changed in 1940.

But let’s play a game of make believe, a tale of what if. What if somehow, some way, the Germans managed to evade the long reach of the Royal Navy to throw themselves upon the beaches and landing fields of Britain in September 1940?

This book is about what happens next... we hope you'll enjoy. John Lambshead

What will you find inside?

Inside you'll find a complete time line from 1935 to the invasion of Britain in September 1940 and the days that followed. Top notch new units, vehicles, theatre selectors, 'What If' history, the 'Real' history and scenarios with campaign rules... all that's missing is a cup of tea.

Discover the weird and wonderful ways the British boffins worked everyday weapons into destructive oddities to defend the home shores - ranging from the Northover projector (the last ever black powder weapon issued to the British army), to the Spigot Mortar - a weapon that ignited Winston Churchill’s ‘boy’s own’ love of the dramatic. We also find out about Winne & Pooh - two 14" guns - and why the Germans dropped a wooden bomb on Pooh!

There are of course many, many more weapons, units (roller skates anyone?) & vehicles listed - with models to come hot on the heals of the book (but more about them later...), we just can't wait for the Great Panjandrum - 35 rockets propelling a 10ft wooden wheel at speeds of 60 mph - packed with explosives... just imagine that screaming toward you as you land on the beach!