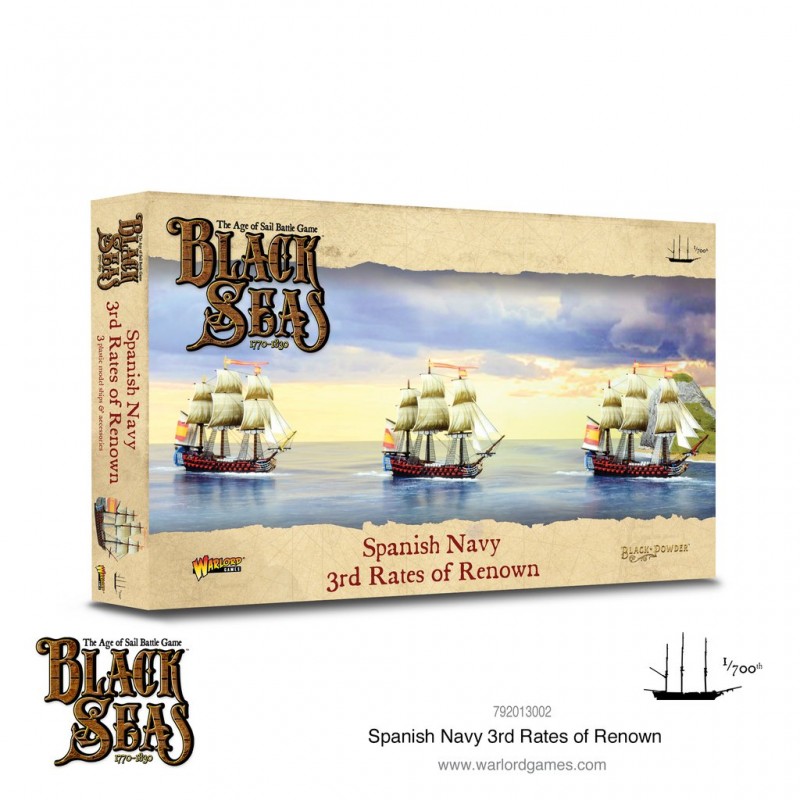 This box set outfits you with three Spanish Navy Third-Rate-Ships-of-the-line. Building upon the superb third rate plastic sprues, the box contains additional metal components to make the following famous vessels, all of which were present at the Battle of Trafalgar!

Monarca - a 74-gun third rate ship of the line belonging to the Montañés-class. Her main guns were arranged over two complete decks, with 28 24-pounder cannons on her lower deck and 30 18-pounders on the upper, in addition to 12 8-pounders and 4 8-pounders on her quarterdeck and forecastle respectively.

Under the command of Captain Teodoro Argumosa, she took part in the Battle of Trafalgar, in which she suffered heavy damage at the hands of HMS Bellerophon. 55 Royal Marines boarded and captured her, but one night later the survivors overpowered their captors and set them adrift in the storm. 3 days after the battle, the survivors had decided to attempt repairs to return to Cadiz but were pursued by HMS Leviathan (which had picked up the adrift marines). She ran aground on 28 October near Huelva and was destroyed by HMS Naiad to prevent her restoration.

Argonauta - an 80-gun third rate ship of the line, she was the last of the Montañés-class of ships (of which there were four). On 25 August 1800, she fought off the British Ferrol expedition as part of Joaquin Moreno's squadron.

Subsequently, she fought at the Battle of Cape Finisterre, and as part of Federico Gravina's second squadron at Trafalgar. Captured at the latter battle, she was taken in tow by HMS Poyphemus, but was abandoned due to the storm which followed the battle On 24 October HMS Defiance rescued survivors and attempted to re-establish a tow unsuccessfully. The Argonauta sank 6 days later, its survivors landing at Algeciras the next day.

San Justo - a 74-gun ship of the line, San Justo was launched 11 November 1779. She participated in such actions as the Battle of Cape St Vincent, and the Siege of Gibraltar. She later participated in the battle of Trafalgar, managing to escape destruction. She was eventually broken up at Cartagena in 1828.